What is Macular Degeneration?

Age-Related Macular Degeneration (AMD) is a degenerative condition involving the retina in the central area known as the macula. In most cases, the damage is mild, and the vision is normal, but the central vision can be lost entirely in advanced cases. Visual tasks that require detail are affected the most, making some daily activities very difficult. AMD does not lead to total blindness even as the disease progresses because peripheral vision remains unaffected. Retaining peripheral vision keeps patients independent even if the vision loss is severe.

What is "Dry" or "Wet" Macular Degeneration?

There are two types of macular degeneration, "dry" and "wet." Dry AMD, or non-exudative AMD, is characterized by the buildup of waste by-products from normal retinal metabolism in small collections called drusen and can be detected on routine examination of the retina. All patients with AMD start as dry, and in the earliest forms of the disease, drusen are present but do not cause compromise of the vision. Over time, the number and size of the drusen can increase, and the retina overlying the drusen can become increasingly atrophic with a decrease in visual function. When the atrophic retinal areas coalesce, the areas become known as geographic atrophy. If areas of geographic atrophy affect the center of the macula, the vision can be significantly affected. 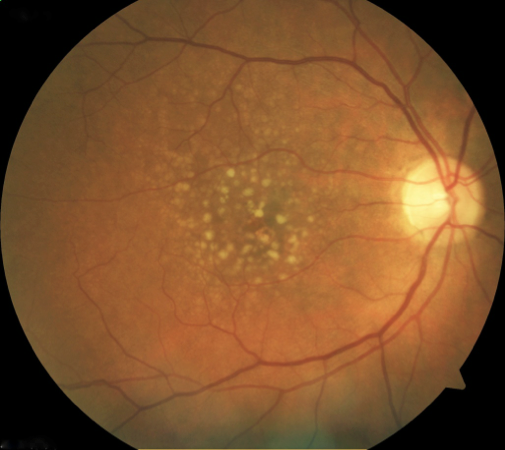 There can be a change to exudative or "wet" AMD during the disease. Wet AMD is characterized by the development of abnormal blood vessels from the layers beneath the retina. These blood vessels are termed neovascular membranes and will leak fluid, protein, and often blood beneath the retina and into the retina itself. When the process begins, there may be only mild disruption to the retina that appears as distortion in the vision. The distortion can turn into a blind spot affecting the central vision as scarring develops with increasing severity. The vision loss from this form of AMD is much more rapidly progressive than the dry form. 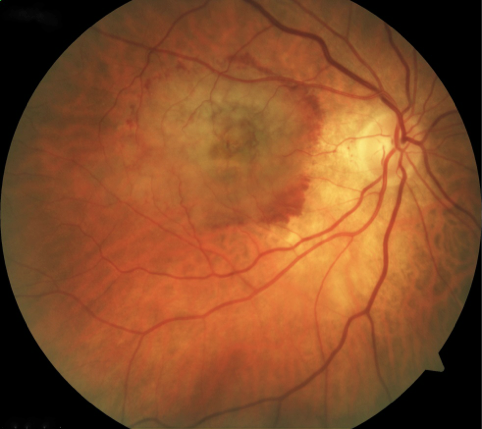 Environmental and genetic factors determine the development and progression of AMD. There are hereditary components to AMD that can run strongly in families but are not solely determined by genetic makeup. Environmental factors play a role in the progression of the disease, in particular smoking. People who smoke are significantly more likely to progress to advanced disease than those who have never smoked. Anyone who regularly smokes is strongly advised to stop to reduce the risk of progression and the other substantial health benefits. Additionally, patients with elevated cholesterol and blood pressure are at increased risk. The most significant risk factor is advancing age, rarely do people under 50 have evidence of the disease.

What to watch for?

The progression of dry AMD is slow, and typically the only symptom is blurred vision. If geographic atrophy develops, a dark or gray spot in the vision may become visible. If wet AMD develops, vision can become distorted.

To monitor changes, an Amsler grid is used at home once a week to track progression: 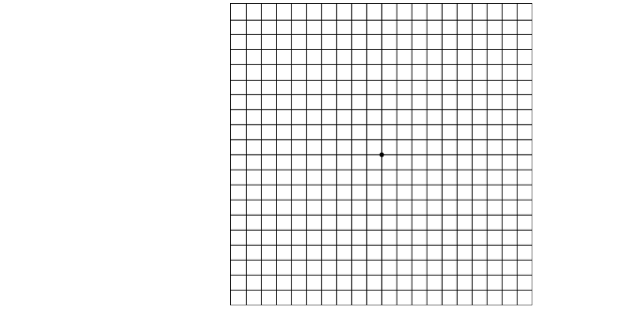 Similarly, other straight lines may appear distorted, such as door frames, window blinds, and highway stripes. With the development of any of these vision changes, a repeat examination should be performed immediately to assess the retina for any signs of wet AMD. Treatment should be initiated as soon as possible to minimize any damage.

How is AMD diagnosed?

The most important part of diagnosing AMD is a thorough retina examination through a dilated pupil. Typically, a retina scan is performed with Optical Coherence Tomography (OCT) to aid in the diagnosis. The scan allows the retina to be seen in cross-sections to evaluate retinal damage better. The OCT scan can also follow the response to treatment by creating detailed retina measurements. Another important diagnostic test is the Fluorescein Angiogram (FA), which allows the visualization of blood flow through the retina and can characterize the neovascular membranes by size, type, and activity. Many different retinal diseases can present as fluid or blood in the retina and neovascular membranes. It is vital to have a complete exam by an experienced Retina Specialist to ensure the correct diagnosis. 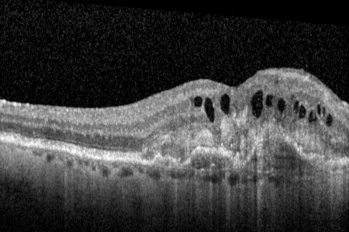 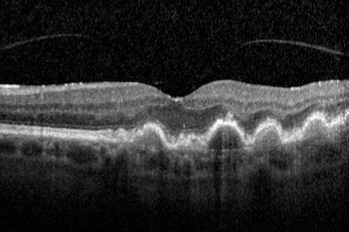 How is AMD treated?

There are no current treatments for dry AMD to halt the progression or reverse the disease's damage. We try to control the environmental factors that promote progression. Most importantly is stopping smoking. Active smokers are more than twice as likely to develop vision loss from AMD.

Nutritional factors also play a role in controlling the progression of dry AMD. In 2001, as a result of the Age-Related Eye Disease Study (AREDS), results were published that taking dietary supplements of Vitamin C, Vitamin E, beta carotene, zinc, and copper, helped decrease the risk of developing advanced AMD by 26%. These vitamins are sold as AREDS formulas from different manufacturers. In 2013, the AREDS 2 study was published, removing beta-carotene, and adding lutein and zeaxanthin with continued benefits.

Intravitreal injections involve using ranibizumab (Lucentis), a 2006 FDA-approved medication for AMD. This medication is an antibody against VEGF, the molecule responsible for developing the abnormal blood vessels that characterize this form of the disease. Ranibizumab and its related medications, bevacizumab (Avastin) and aflibercept (Eylea), have revolutionized the treatment of wet AMD. Instead of developing a large central blind spot, the vision can be stabilized over 90% of the time, and about 1/3 of patients have visual improvement.

As a class, these medications are called anti-VEFGs and are injected into the eye every month to control the activity of neovascular membranes. Depending on the response, the interval between the injections can be lengthened. These medications are excellent treatments but do not cure the disease. Keeping this in mind, the duration and number of treatments needed cannot be predicted.

Please fill out this form, and we will contact you during the next business day to schedule your appointment.

For medical emergencies, call 911. Please do not submit urgent or time-sensitive requests through this form. Please call the office at (817) 865-6800.

Thank you for requesting an appointment.

We will use your contact information provided to get in touch with you during the next business day (Monday through Friday) to schedule your appointment.

For medical emergencies, call 911. Please do not submit urgent or time-sensitive requests through this form. Please call the office at (817) 865-6800.

Thank you,
Retina Center of Texas